After its world crown in 2019 to celebrate the brand's 60 years of existence, the Birel ART Racing Team is getting ready for more success in 2020. International high-level competition remains the scene of the most spectacular sporting and technical confrontations between the main chassis manufacturers, and Birel ART intends to showcase its skill by aiming for the top places in the four categories in which it is involved.

"We are very pleased to have achieved our goal last year by winning the KZ World Championship," said Ronni Sala, President of the Birel ART Group, "But the competition is constantly renewed and we are setting out again for new challenges in 2020 with great ambitions. We will be able to count on the quality of our equipment, which is constantly improving, as well as on a very competent technical team under the direction of Luca Filini. Our official driver training brings together confirmed talents and young hopefuls in the making. What hasn't changed is our determination to fight for victory!ÃƒÆ’Ã‚Â¢ÃƒÂ¢Ã¢â‚¬Å¡Ã‚Â¬Ãƒâ€šÃ‚Â

At the Lissone factory, the season started long ago with the production of the chassis derived from the kart that enabled Marijn Kremers to win the World KZ Championship at Lonato. The training sessions have resumed and it is time to announce the drivers who will defend the colours of the Birel ART Racing Team this year, with potential for great performance.

The succession is open in KZ

Two very experienced Italian drivers will take up the challenge of continuing the momentum of 2019 in the premier class. After Kremers' move to single-seaters, Alex Irlando, winner of the KZ2 International Super Cup in 2016 and Riccardo Longhi, KZ World vice-Champion of 2019, have complementary qualities and will form a formidable duo to carry the torch to the peaks of KZ. In view of their outstanding performances last year, the Italians Leonardo Marseglia and Giuseppe Palomba will have a strong card to play in KZ2 with the New Zealander Matthew Payne at their side.

Five new drivers from five different countries will join the official Birel ART team in OK. The Finn Nikolas Pirttilahti, who scored a double top 10 in the European and World Championship last year, the Briton Clayton Ravenscroft who is constantly at the international forefront in X30 and Rotax, the Belgian Kobe Pauwels, 2nd in the 2018 FIA Karting Academy Trophy, the eclectic Italian Matteo Massetani and the promising Thai driver Sutumno Tanapongpan.

Willingness to make it happen in OK-Junior

Only two drivers, but talent and motivation to spare for their second season in OK-Junior for the Italian Cristian Bertuca, who progressed to 9th in the World Junior Championship with Birel ART, and the Polish driver Tymoteusz Kucharczyk, 11th in the European Junior Championship, who joins the team on a chassis in the colours of Robert Kubica, a real star among his compatriots.

Selected at the end of 2018 by the Richard Mille Young Talent Academy, Maya Weug will take advantage of an additional year in OK to build on the strong progress of her performances in 2019.

The Birel ART Racing Team's racing programme will include the FIA Karting Championships, several WSK Promotion events and the Champions of the Future series launched by RGMMC.

The Leclerc By Lennox Racing Team's performances out on the track get off again to a good start and they can celebrate two podium finishes at the WSK Super Master Series thanks to Jamie Day and Matteo Viganò. 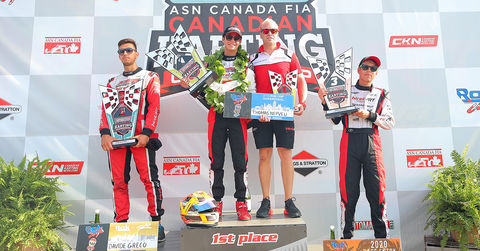