The race on the Kristianstad circuit, in Sweden, closes the curtain on the main CIK-FIA international competitions. The FIA Karting World Championship and the FIA Karting World Junior Championship see the best single-speed karting experts competing for the coveted world title in the OK and OKJ classes. In this context, the Tony Kart Racing Team shows its value by entering the Top 5 list of the OK category thanks to Noah Milell.

The Swedish driver begins his weekend of race with the ninth fastest time in the qualifying heats. After that, other than a first heat closed in 11th, his rhythm is a continuous crescendo that brings him close to the top positions.

The bad weather makes the track wet, but the home driver is not scared and completes the subsequent eliminatory heats with a third, two fourth places and two victories, thus gaining the sixth place in the starting grid of the final.

In the decisive race, Noah has to deal not only with his rivals but also with his teammate David Vidales, particularly at ease on the 1,221 meters of the Kristianstad circuit. Thanks to three silver medals, a victory and a third place, the Spaniard is the second best driver ever in the heats, positioning in the first row of the grid.

Both protagonists of an excellent start, the two drivers of the Tony Kart Racing Team often find themselves wheel-to-head in the top positions, showing off all the virtuousness of the material available to them.

The turning point of the race occurs during the 16th lap, when Milell definitively overcomes Vidales crossing the checkered flag in a precious fifth position that consolidates the progress made during this season. The Spanish driver, on the other hand, closes only eighth: a result that is definitely not deserved, if considering the work done and the speed shown during the whole weekend.

Some more difficulties, however, for the Junior category's drivers. The most consistent is Josep Maria MartÃƒÆ’Ã†â€™Ãƒâ€šÃ‚Â¬, good at always closing in the Top 10 during the qualifying heats, also putting two third places on his gold album, helping him to get the tenth position on the final grid. Unfortunately, during the tenth lap he loses ground and and goes to the 19th place under the checkered flag.

Laurens Van Hoepen and Sebastian Montoya are ranked a little behind, while Nikita Bedrin is involved after only two laps in a collisionthat forces him to stop.

Considering a not so happy result for the official drivers, we must underline the excellent outcome provided by the Tony Kart chassis of the Ward Racing team. Three drivers finish in the top ten of the final: Kirill Small, author of the fastest lap of the race and a comeback of 10 positions, is 5th; Dino Beganovic (second after the heats) is 7th and Suleiman Zanfari is 9th, after having also been the author of a prodigious comeback from the 21st position. 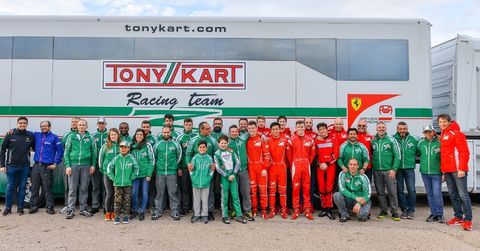 Campus in Muro Leccese for the Racing Team and FDA drivers

Much work and amusement for both the Tony Kart Racing Team and the Ferrari Driver Academy driver.