After a sunny Thursday, light but persistent rain wetted the track at Wackersdorf until the early morning of Friday, 3rd May, 2019. The sun however managed to dry the Bavarian asphalt before the lunch break and the conditions were ideal for Qualifying Practice.

The programme of the Kart Grand Prix of Germany will be eclectic with the first Competition of the FIA Karting European Championships - KZ & KZ2 alongside that of the FIA Karting Academy Trophy. The 1190m of the Bavarian circuit of Wackersdorf lent itself particularly well to the exercise and the first day was marked by very small gaps in performance during the Qualifying Practices.

KZ2: Longhi back to Pole in Wackersdorf

With 75 Drivers, the Qualifying Practice of the first FIA Karting European Championship - KZ2 Competition took place over three sessions on the Prokart Raceland track. In 2017, during the FIA Karting International Super Cup - KZ2, Riccardo Longhi (ITA) had already taken Pole Position here. The fastest Driver in Free Practice, Longhi was once again ahead of the field, taking Pole Position in 46''996 in session 1, almost a tenth faster than Simone Cunati (ITA), fastest in session 2 and 0.131'' ahead of Giuseppe Palomba (ITA), leader of session 3, for a leading hat-trick in the Italian colours. David Trefilovs (DEU) had a great performance, finishing 4th in front of Senna Van Walstijn (NLD).

"The last lap was decisive," explained Longhi. "I waited for the last moment, three and a half minutes from the end, to get on the track and everything went well. I am very happy with my performance level in the dry, but if it rains tomorrow for the heats as forecast, we will all be lacking benchmarks as we only tested the rain tyres in a single session".

Ho on pole of the Academy

With a best time of 51''224, Christian Ho (SGP) was the fastest in the first timed session, only 4 thousandths ahead of Paolo Ferrari (ITA) and Filip Jenic (SRB) in 3rd by 17 thousandths. De Haan dominated the second session with 51''265, one tenth ahead of Luca Mars, while LoÃƒÆ’Ã†â€™Ãƒâ€ Ã¢â‚¬â„¢ÃƒÆ’Ã¢â‚¬Å¡Ãƒâ€šÃ‚Â¯s Delbart (BEL) took 3rd place. Ho scored the first pole position of the season, followed by Ferrari and Jenic, De Haan was 4th against five other drivers in the first series. Elliott Vayron (FRA) took 5th place, followed by Magnus Germansen Daae (DNK), Charlie Wurz (AUT) and Bartlomiej Piekutoswski (POL) in 8th.

"The standard is very high among the frontrunners, the gaps were very small," said Christian Ho. "The Exprit / Vortex / Bridgestone equipment is really good. I managed to improve my first sector in the last lap and to attack until the finish line to get pole position. There will be some good fights in the Qualifying Heats".

Vigano gets his first pole in KZ

Although Fabian Federer (ITA) had achieved an extraordinary lap of 46''458 during the last session of Free Practice, 0.201'' ahead of Marijn Kremers (NLD) and Alessandro Irlando (ITA), the Qualifying Practice of the first Competition of the FIA Karting European Championship - KZ were much tighter between the 24 participants. In the very last metres of the session, Matteo Vigano (ITA) clocked a time of 46''991 and beat Jorrit Pex (NLD) by 18 thousandths of a second. Alessandro Irlando (ITA) was not far off in 3rd place, while Anthony Abbasse (FRA) followed him by three thousandths. Lorenzo Camplese (ITA) was 5th, Marijn Kremers (NLD) 6th, Simo Puhakka (FIN) 7th and Marco Ardigo (ITA) 8th within 0.09'' of the poleman.

"I did not expect to get pole position on my first KZ race," said Vigano. "I took to the track late in the session, but I was lucky enough to choose the right moment to do two quick laps without a hitch. It will probably be more complicated tomorrow in the rain because I am aware that I still have to progress when the track becomes slippery."

Estimated Timetable for Saturday, 4th May

The Wackersdorf Competition can be followed on the official FIA Karting Championship app for iOS and Android mobile devices and at www.cikfia.com. 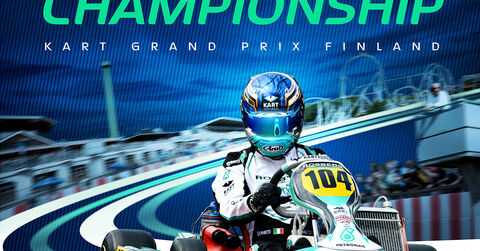