In the KZ2 category the Vortex RKZ engines have repeated the success gained seven days ago on the International Naples circuit of Sarno. Also this time, it was Marco ArdigÃƒÆ’Ã†â€™Ãƒâ€šÃ‚Â², of the Tony Kart Racing Team, shining in the master class, obtaining a third place at the end of the qualifying heats followed by the second position in the prefinal and the absolute victory in the decisive race. A result that allowed him to conquer the WSK 2018 Champion Title and to show, at the same time, the virtuousness and competitiveness of our engines. On the podium, also the RKZ engines of the Kosmic chassis of Patrik Hajek, while the Top 10 list was entered by two Tony Kart chassis of Matteo ViganÃƒÆ’Ã†â€™Ãƒâ€šÃ‚Â² (author of the pole position with 56''273) and Simo Puhakka.

In the OK category, the Vortex DDS engines represented the choice of 34% of the registered drivers: among them Zane Maloney (Ricky Flynn Motorsport) who soon shone from the beginning of the weekend, for being the author of the fastest lap (57''194) that earned him the pole position. Nicklas Nielsen (KSM Schumacher Racing Team) then became the leader with won two heats and got a success in the prefinal, while David Vidales and Noah Milell respectively took a second and third place in the Final. Along with them also entered the Top 10 Harry Thompson (Ricky Flynn Motorsport).

The DDJ Vortex engines in the OKJ class were chosen by 30 drivers out of the 90 ones checked (33%); an excellent start that then led to four victories in the heats, three of which gained by Paul Aron (Ricky Flynn Motorsport) and one by Dino Beganovic (Ward Racing). The Estonian driver also distinguished for his success in the prefinal, where he also signed the record of the entire event (58''384), and for the overall triumph in the Final, in which also the Vortex engine brought to the track by Georgi Dimitrov showed a good performance. Moreover, in the prefinals, the DDJ engines led the scene thanks to the podium conquered by Dino Beganovic (second place) and by Zak O' Sullivan (third place), to the fourth place of Sebastian Montoya (Tony Kart Racing Team) and to the fifth position of Kirill Smal (Ward Racing). 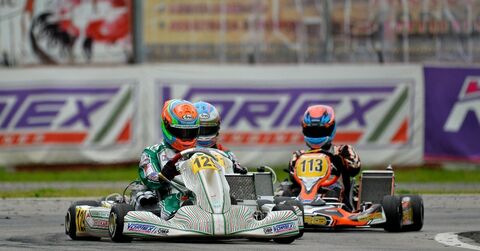