When you have raced every Labor Day weekend for 25 years, the highlights tend to pile up. But competitors in this year's version of the Xtream Rock Island Grand Prix powered by Mediacom, world's largest karting street race, could make some history of their own.

Tony Neilson, one of the nation's top kart-racing talents from nearby Delmar, Iowa currently sits second in the all-time Rock Island win list with 17, trailing only legendary Gary Lawson who has 25. But Neilson could put a good dent in that spread after entering his Margay machine in 10 of this year's 17 races. He and his team have proven before that multiple wins are possible, stacking up six wins in 2015.

Another race to watch is the 20th running of the King of the Streets open shifter race with a stellar field already registered with some last-minute additions still expected. Californian Billy Musgrave and Jake French from Texas, who finished 1-2 at the final race of the Superkarts! USA Pro Series, will try to keep Rory Van der Steur from Maryland from repeating as King of the Streets. Scott ÃƒÆ’Ã†â€™Ãƒâ€šÃ‚Â¢ÃƒÆ’Ã‚Â¢ÃƒÂ¢Ã¢â€šÂ¬Ã…Â¡Ãƒâ€šÃ‚Â¬ÃƒÆ’Ã¢â‚¬Â¦ÃƒÂ¢Ã¢â€šÂ¬Ã…â€œSkitchyÃƒÆ’Ã†â€™Ãƒâ€šÃ‚Â¢ÃƒÆ’Ã‚Â¢ÃƒÂ¢Ã¢â€šÂ¬Ã…Â¡Ãƒâ€šÃ‚Â¬ÃƒÆ’Ã¢â‚¬Å¡Ãƒâ€šÃ‚Â Barnes from Bermuda, a multi-time winner at Rock Island who has never been King, is also expected in the field again. Josh Lane from Illinois, who was crowned King in 2015, is back as is Texan Austin Wilkins, who won the crown in 2017 and holds the track's fast lap record. Joe Janowski who won the inaugural King of the Streets race in Oklahoma City, will be on hand to crown the new king.

Another highlight of the weekend is always the Briggs Heavy Travis DeVriendt Memorial race Ã¢â‚¬â€ the first race of the day on Sunday. The race each year helps to draw attention to suicide awareness after the untimely death of former Rock Island champion and Quad-Citian. An on-track autograph session for race fans will precede that race.

The Margay Ignite out-of-the box package will also be featuring in three races this year. This weekend also includes three races featuring vintage karts from 1984 or earlier. An increase in entries this year should result in some exciting racing from these racers who still race their classic machines for the love of the sport.

But when you've had top quality racing for 25 years, ironman efforts, long distances traveled and historic achievements are not unusual.

In 1998 Jason Birdsell was the original ironman, entering 9 classes and winning five of them while coming close in several others. Alan Rudolph has won the King of the Streets crown five times

Nelson Phillippe came over from France to win at Rock Island. Then in 2004 he became the youngest driver to ever compete in Champ Car Ã¢â‚¬â€ which later merged with IndyCar. In 2009 Phillipe announced that his new ÃƒÆ’Ã†â€™Ãƒâ€šÃ‚Â¢ÃƒÆ’Ã‚Â¢ÃƒÂ¢Ã¢â€šÂ¬Ã…Â¡Ãƒâ€šÃ‚Â¬ÃƒÆ’Ã¢â‚¬Â¦ÃƒÂ¢Ã¢â€šÂ¬Ã…â€œI Drive GreenÃƒÆ’Ã†â€™Ãƒâ€šÃ‚Â¢ÃƒÆ’Ã‚Â¢ÃƒÂ¢Ã¢â€šÂ¬Ã…Â¡Ãƒâ€šÃ‚Â¬ÃƒÆ’Ã¢â‚¬Å¡Ãƒâ€šÃ‚Â race team would field the first carbon neutral entry in the Indianapolis 500.

While Phillippe came a long way to win at The Rock, Michele Bumgardner came even farther. She was the first woman to win here in 2008 and repeated the feat the next year. The Filipino driver was known as the Asian Karting Queen and became Rock Island's 8th foreign-born winner. There have now been 12.

Joey Hand was an early winner at Rock Island and went on to a storied career in sports car racing. He won the Rolex 24 at Daytona and 12 hours of Sebring on his way to the ALMS GT Driver's Championship. In his first start at the legendary 24 Hours of LeMans he finished third.

In 2002, Scott Speed won the coveting King of the Streets title. It was the last kart race he ever ran and he called it his greatest karting victory. With support from Red Bull he moved quickly up the motorsports ladder to become the first American in decades to race in Formula 1. He later raced with NASCAR and Formula E, twice was in the X Games and for the last several years has run the Red Bull Global Rallycross Championship.

Rock Island has also had competitors go on to successful motorsports careers outside the cockpit.

Anna Chatten raced here with her father when she was in high school. Her career has led her through the crew side of the sport. In 2009, Anna made history when she became the first woman ÃƒÆ’Ã†â€™Ãƒâ€šÃ‚Â¢ÃƒÆ’Ã‚Â¢ÃƒÂ¢Ã¢â€šÂ¬Ã…Â¡Ãƒâ€šÃ‚Â¬ÃƒÆ’Ã¢â‚¬Â¦ÃƒÂ¢Ã¢â€šÂ¬Ã…â€œover the wallÃƒÆ’Ã†â€™Ãƒâ€šÃ‚Â¢ÃƒÆ’Ã‚Â¢ÃƒÂ¢Ã¢â€šÂ¬Ã…Â¡Ãƒâ€šÃ‚Â¬ÃƒÆ’Ã¢â‚¬Å¡Ãƒâ€šÃ‚Â at the Indianapolis 500 where she was transmission tech and worked the air jack with Dryer & Reinbold's award winning pit crew.

Another Rock Island racer, Cal Stewart, a multi-time winner, is part of the Hendricks Motorsports team and Dillion Morley works in quality control for Stewart Ã¢â‚¬â€ Haas Racing, both in North Carolina.

This year's Grand Prix offers 17 feature races Sunday, Sept. 1. Practice and heat races fill the racing schedule on Saturday, August 31. All racing will be featured live worldwide in a webcast by ekartingnews.com.

There will continue to be other attractions offered during the race day and into the evening. This year's Sunday Car Show is expected to include 50 cars from the Quad City Camaro Club, QC Cruisers, QC Gearheads and QC Mustang Club on 18th Street near WHBF TV. The popular Oscar Meyer Weiner Mobile will be at the car show Sunday greeting fans, giving away Weiner Whistles and samples. There will also be a variety of food and merchandise vendors in the center of the race course.

Thursday, Friday and Saturday nights will feature a full lineup of outdoor concert entertainment. Grand Prix Weekend will be kicked off with a free family concert in Schwiebert Riverfront Park at 7 p.m. Thursday night sponsored by the Rock Island Parks and Recreation Department and featuring the high energy group Wicked Liz and the Bellyswirls.

For more information on the race weekend, including the detailed race schedule, please visit rockislandgrandprix.com.

5 p.m.: Streets close in The District of Rock Island.

7:15 a.m.: Mandatory Driver's Meeting in front of the Argus building.

Note: All times tentative and subject to change.

This year's race is August 31 and September 1. 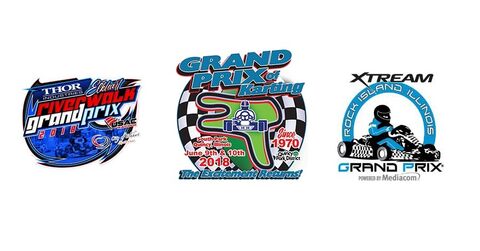