The 2019 Rotax All Star Finals taking place in Speedsportz Racing Park North Houston shows the Rotax is presently prepared to return to what was, and more.

A strong topic of discussion is the new Mojo D5 tire, utilized in the Senior, Master, DD2, and DD2 Master categories. Immediate reactions around the paddock were positive, with drivers most impressed with the consistency of the compound. A big step up from the previous class tire, the D2, perhaps the compound and consistency will lure in and win back drivers round the country.

With lower entries than expected, the event was not shy nor shorthanded of close competitive racing.

One example being the small yet mighty Senior MAX class, as we saw nine drivers compete in tight, close, and competitive racing. The return of Nicholas Brueckner to Orsolon Racing and his immediate return of pace was noteworthy as he controlled the weekend all the way to his final victory.

Junior MAX -- much like Senior Max -- was controlled by one driver, Conor Zillisch. The North Carolinian showed his raw pace in the final, with a victory over the margin of 5 seconds. Challenges early in the weekend from Noah Baker and Ryan Shehan were consistent, however not strong enough to stop the Team Felon pilot from his dominant final victory.

DD2 saw Max Hewitt and Davide Greco duke it out, right from the get-go. Greco took pole position over Hewitt, and would win two heats in the rain. However, Hewitt's Texas home-field advantage materialized on Sunday. The CRG pace would reign supreme with no answer from the Canadian Davide Greco. Max Hewitt would go on to claim victory by just over 2 seconds.

Mini Max, DD2 Masters, and Masters Max, although small in size showed promising racing and great progress for the future. Jack Jeffers would claim victory in Mini-Max, as Derek Wang in Masters Max would do the same. In DD2 Master Mundy Loyer and Nathan Mauel would swap finish spots throughout the weekend. However it was Mauel who would take victory over Loyer by an impressive 6 seconds.

The next Rotax event state-side will be The Stars and Stripes Trophy at Utah Motorsport Campus May 17th to 19th, a track all so familiar with Rotax. Amazing racing took place here in 2014 for the US Rotax MAX Grand Nationals as well as the US Open in 2016. 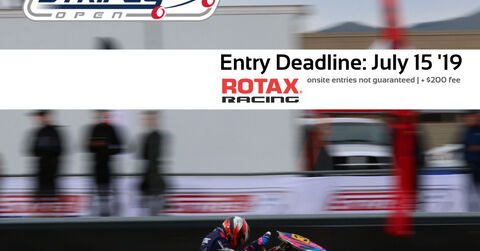 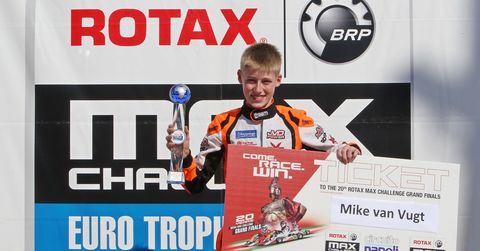 The Dutch driver took a convincing victory in Belgium.

Lupien comes out on top, showing his legs in the Senior MAX final