The weather forecasts were correct and rain gradually arrived at Wackersdorf to play a significant role in the Qualifying Heats of the FIA Karting European Championship - KZ & KZ2, as well as those of the FIA Karting Academy Trophy. Abbasse in KZ, Schmitz in KZ2 and De Haan in Academy have had a very positive day despite the difficult conditions.

The risks of losing places were numerous throughout the day from Saturday 4th May 2019 in Wackersdorf. Contacts, penalties, skirmishes, and spins have punctuated the Competition while the grip continued to change with the intensity of the rain. The positions have changed since Qualifying Practice yesterday.

The Qualifying Heats will continue on Sunday morning with six heats on the programme, one per Driver, before the list of the 34 Drivers qualified for the Finals of the three categories is announced.

During particularly difficult races for the young Drivers of the FIA Karting Academy Trophy, Robert De Haan (NLD)'s talent and experience spoke for itself: "I am very happy to have been able to win twice today. During the first heat, the rain began to fall a few laps from the finish, and I needed above all to stay on the track. I also won a second wet heat. I am well placed for the moment and I think I can finish in the top three of the Final if I remain calm and do my best tomorrow."

Several Drivers have revealed very high ability during this complex day. This was the case for Fuki Tanaka (JPN), Lucas Mendes (BRA) and Paolo Ferrari (ITA). Others encountered setbacks that do not detract from their strong potential. The end of the Wackersdorf Competition could still hold some interesting surprises.

Winner of the first Heat and 2nd in the next, Anthony Abbasse (FRA) was brilliant in the rain as usual. He is ahead of Jorrit Pex (NLD), who was victorious in the second Heat. The poleman Matteo Vigano (ITA) was still competitive and stayed in the leading group along with Alessandro Irlando (ITA) and Marijn Kremers (NLD).

"The day was not easy with the constant weather changes," said Abbasse. "The set-up was slightly less well adapted for the second heat and I had to deal with a strong opponent, Jorrit Pex. I could not do better than 2nd. Conditions may be different tomorrow and it is impossible to know who will be the most competitive. We have of course conducted tests on the dry, but today's rain has flushed the track and it will be another matter on Sunday. Make no mistake, the competition is sharp."

KZ2: Schmitz at ease in the rain

The Drivers of the FIA Karting European Championship - KZ2 competed in nine Qualifying Heats on Saturday, gradually moving from a dry to wet track during the day. Alexander Schmitz (DEU) ended up with three wins: "It was complicated, especially in the first heat that finished in the rain when we started on slick tyres. We were then able to focus on 100% rain settings and everything went well. I am confident for the rest of the Competition because I know we are fast also in the dry. And then I know the peculiarities of the circuit of Wackersdorf very well, an experience that should count against some of my opponents."

Emil Skaras (SWE) also made a good run in front of Drivers like Benjamin TÃƒÆ’Ã†â€™Ãƒâ€šÃ‚Â¶rnqvist Persson (SWE), Simone Cunati (ITA), Alexander Dahlberg (SWE) and Giuseppe Palomba (ITA). The Competition, however, remains far from decided with many talented Drivers in this Championship.

Estimated schedule of May 5th

The Wackersdorf Competition can be followed on the official FIA Karting Championship app for iOS and Android mobile devices and at www.cikfia.com. 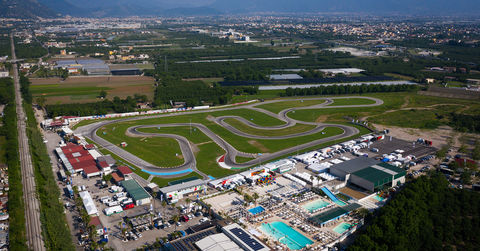