TB Kart USA opened their 2020 campaign this past weekend at the first round of the ROK Cup USA Florida Winter Tour. Taking place on a temporary circuit on the grounds of the Isle Casino in Pompano Beach, Florida, the Sunshine State based program secured one podium result, three top-five finishes and put five drivers inside the top-ten by the time the final checkered flag flew on Sunday.

It was a great start to our season as the speed was there, but the results do not tell the entire story," explained TB Kart USA's Farshad Bagheri. "We had a few incidents and issues in the weekend's main events on Sunday that took away two or three top-ten results. Austin Garrison did a great job in leading the team showing consistent improvement in his first time with our program and eventually worked his way forward to finish on the podium."

Qualifying in the ninth position, Garrison methodically advanced forward through the three heat races and prefinal. Starting the main event on the inside of row three, Garrison flexed his muscles and showed the speed of the TB Kart USA shifter chassis to work his way to the podium. Zachary Hollingshead was poised to score a top-ten result with an 11th place run in the prefinal but was pushed back in the main event after contact.

Bagheri continued, "If we had a better start to the weekend, I think Austin could have challenged for the win. We know what we need to work on and will aim to do just that in round two next month."

Rene Martinelli and Bagheri both found themselves inside the top-ten in the Shifter Masters ROK class at the conclusion of the first race weekend of the season. Bagheri had a steady run in the heat races and turned that consistently into a tenth-place result in the main event. After qualifying eighth, Martinelli improved in each and every on-track session to end his prefinal in the third position. Aiming for a podium result in the main event, Martinelli fell just short, crossing the line in fourth. Peter Licciardi scored a trio of third place results in the heat races and was hoping to challenge for the win, but a retirement in the prefinal ruined any chances of a podium result.

Jed Perkins showed the strength of the TB Kart brand in the 206 Senior class driving to a fifth place finish. Running in seventh and eighth throughout the heats, the longer main event suited Perkins' TB Kart setup as he was able to advance forward to finish in the top-five. Jorge Ruiz did not have the weekend he wanted and will shift his focus to Ocala next month.

Veteran Florida racer and multi-time state champion Colin Warren threw his hat in the mix in ROK Senior competing against some of the best drivers in the country. After three heat races to forget, Warren had an outstanding run in the prefinal to drive his way forward and finish 13th. Setting the goal of a top-ten, Warren did just that pushing his TB Kart to the limit as he slotted himself into the ninth position.

Bagheri added, "It is back to a permanent track for round two and one that we have had success at. We are looking forward to competing at Ocala Gran Prix and cannot wait for the next ROK Cup USA event."

With the next ROK Cup USA Florida Winter Tour set for the weekend of February 13th to the 16th, TB Kart USA will look to improve on their results from this past weekend and put their drivers in championship contention.

For more information on TB Kart USA, how to become a dealer, or their national level race team, please contact Farshad Bagheri at 727.204.7633 or via email to [email protected] TB Kart USA can also be reached online at www.TBKartUSA.com or by searching TB Kart USA on the Facebook, Instagram and Twitter social media platforms. 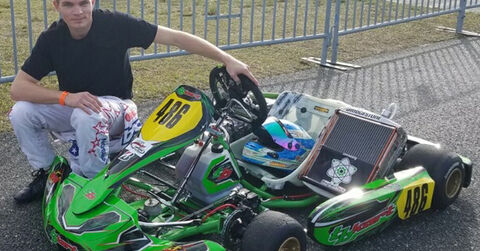