With a quick turnaround between their first two events of 2020, Team Supertune traveled to Pompano Beach, Florida for the opening round of the ROK Cup USA Florida Winter Tour. With a stout eleven driver lineup, the Tony Kart branded team put two drivers on the podium as Yanapu Cui and Noah Baker found their way to the pointy end of the field at the Isle Casino temporary circuit.

"It was good to be back on the podium but not good enough for us," explained Supertune's Ben Cruttenden. "Congratulations to Yanapu and Noah on their strong results as well as the Morgan brothers for their top-five finishes. These finishes give us something to build out towards our February events."

Leading the way on the results sheet was Yanapu Cui who made the trek from China to race at the Florida Winter Tour. Competing in the Mini ROK class, Cui turned his sixth place qualifying effort into a second place podium result after three strong heat races. Finishing fourth in the prefinal, Cui leveled up two more positions in the main event.

Sebastian Garzon looked to be in the position to challenge for a top-five result after crossing the stripe sixth in the prefinal. Showing pace throughout the weekend, Garzon was able to complete the full race distance but contact put him back in the field as he drove forward to finish 16th. Christian Cameron, Christian Quijano and Diego Ardiles had trying main events and will shift their focus to the next round in Ocala, Florida. In the Micro ROK class, Alessandro Truchot finished tenth while Carlos Molina was classified in the twelfth position.

Baker found his way to the third and final step of the podium after consistently running inside the top-five of the 100cc Junior class. Saving his best result for the final on track session of the weekend, Baker proved his race winning speed as he secured his first podium result of the season. ROK the RIO Champion Jorge Ortiz had a pair of top-five results in the heat races but a lack of racing luck in the main event sent him well down the running order.

Cruttenden continued, "We will complete some more testing and engine development as we move forward towards the next event. Our goal is to put Tony Kart and Supertune on the top step of the podium and that will be our goal in Ocala."

The second round of the ROK Cup USA Florida Winter Tour is set for February 13- 16th at the pristine Ocala Gran Prix facility in Ocala, Florida. 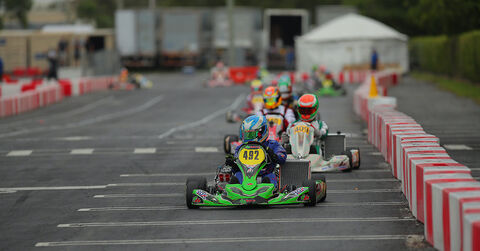