Seventeen classes are currently set to do battle at the Indianapolis Motor Speedway July 6-8th.  The 2017 event saw 307 entries in the inaugural running of the Battle of the Brickyard. The first karting event at the Indianapolis Motor Speedway and the first karting event sanctioned by USAC was an overwhelming success in what was billed by many as having the ÃƒÆ’Ã‚Â¢ÃƒÂ¢Ã¢â‚¬Å¡Ã‚Â¬Ãƒâ€¦Ã¢â‚¬Å“atmosphere of a club race, but on a world-renowned stageÃƒÆ’Ã‚Â¢ÃƒÂ¢Ã¢â‚¬Å¡Ã‚Â¬Ãƒâ€šÃ‚Â.  With free admission to the entire paddock, a mixed class structure, and the chance to race at The Racing Capital of the World™ the Battle at the Brickyard quickly took on the look and feel of what a major karting event should be: competitive and fun... Without the pressure of cash payouts our points, competitors raced for the pure enjoyment of the sport and the results did not disappoint.

Eric Jones was the only competitor to double up in 2017 with wins in Briggs and Stratton 206 Medium and Heavy. The Heavy class was a 4 way duel separating the top 4 by a mere .181 of a second.

USAC Karting is making the move to conform the Briggs & Stratton 206 Junior class to CIK bodywork and seat rules for the 2018 Battle at the Brickyard at the Indianapolis Motor Speedway. This is to reduce the need for competitors to develop or purchase ÃƒÆ’Ã‚Â¢ÃƒÂ¢Ã¢â‚¬Å¡Ã‚Â¬Ãƒâ€¦Ã¢â‚¬Å“low drag aero bodiesÃƒÆ’Ã‚Â¢ÃƒÂ¢Ã¢â‚¬Å¡Ã‚Â¬Ãƒâ€šÃ‚Â.
Returning to the grid for 2018 will be the Briggs and Stratton 206 medium, heavy, and masters joining the Margay Ignite senior class. All classes will utilize CIK Bodywork and seat rules while on Bridgestone rubber.

The 2 cycle classes will see minimal changes for 2018. The most notable will be the addition of KZ to the Stock Honda CR125 engines in the 125cc Shifter Masters. This addition will give the KZ powered competitors that are 35 years old and up a second class to race in 2018. The Honda CR125 and KZ drivers will remain separated but share track time in their respective classes for 125cc shifter. The three 125cc shifter classes will compete on MG rubber. Along with the 125cc classes, the popular Honda CR80 Senior shifter class will return in 2018 on Hoosier Tires. IAME Senior and Junior will both return unchanged as well as TAG Masters. TAG Masters is open to the X30, Leopard, Rotax FR125, Vortex ROK TT, and Rotax FR125 EVO engines.

Yamaha classes will also return in 2018; however, more details will be released at a later date. With great racing across the four classes resulting in wins that were all separated by less than a second, USAC still believes the KT100 provides one of the most competitive and economical platforms in karting.

How close was the competition in the Yamaha classes? Weston Moon edged out Yamaha Masters winner Ron Petersen and Michael Dittmer in Yamaha Heavy .183 of a second in one of the best finishes of the day in Yamaha.

In bringing back one of the time honored traditions of the Indianapolis Motor Speedway, USAC Karting is bringing back the tradition of Bump Day. On May 20th if any class has fewer than 16 entries they are at risk of being ÃƒÆ’Ã‚Â¢ÃƒÂ¢Ã¢â‚¬Å¡Ã‚Â¬Ãƒâ€¦Ã¢â‚¬Å“bumped outÃƒÆ’Ã‚Â¢ÃƒÂ¢Ã¢â‚¬Å¡Ã‚Â¬Ãƒâ€šÃ‚Â of the 2018 running, so enter early! USAC Karting will make all attempts to combine track time for classes with lesser entries where possible for the safety of the competitors.

For complete rules and regulations go to www.USACkarting.com. Be sure to keep up with us on social media. 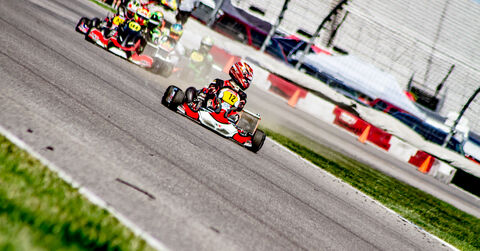 DR Racing Kart heavily represented in the racing capital of the country.