It's weird to say this, but despite winning on Sunday and capturing the championship at the same time, Ryan Norberg probably had a disappointing weekend by his standards.

A qualifying run of 6th was his worst of the FWT season, but he and PSL kept working to move forward. The work moved them to third after the heats, and second in the pre-final Sunday morning.

The 18-lap Final was one of the more exciting races of the weekend where we saw four lead changes and a drag race to the finish. Ryan MacDermid led the field to the green after the impressive pre-final win and kept his Birel ART out front for the first three laps. Diego Ramos, starting from fifth, grabbed the lead a few laps into the race, but it didn't last long as Logan Cusson eventually made it to the point just past the halfway mark.

Cusson seemed to struggle while out front and created a bottleneck, which eventually swallowed him up and spit him out back to 7th when he finally found his way again.

Out front in the closing laps was Brazilian Ramos, who had a healthy gap over Norberg in second. On the final lap, despite the gap, Ramos elected to drive defensively which allowed the Birel ART driver to close fast, resulting in an over-under attempt in the final corner. Norberg's momentum was stymied when he ran out of track as Ramos inched him closer to the grass.

The NF Piquet Sports driver had appeared to pick up his first win of the season. However, after the race, officials made the call that Ramos's mechanic had used tools on the pre-grid, which is forbidden. The penalty dropped the winner to last and promoted the Orlando resident to first.

This also bumped MacDermid to second, however, he too would be penalized for an aggressive move on Cusson, resulting in a two position penalty to fourth. This promoted Arthur Leist to second, who was an early front runner on the weekend and had started pole in the prefinal, but an accident in that race knocked him to 17th. The drive in the final saw the Brazilian climb 15 spots and made everyone wonder what could have been. Completing the day's podium was Eduardo Barrichello, who rebounded in a big way this weekend after struggling in Ocala.

The championship was decisively won by Norberg, repeating his performance from last year, and this time earning himself the ROK International Final ticket to Italy this October. 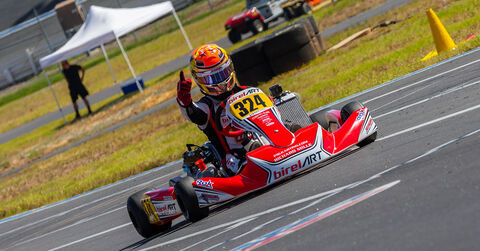