Kart360 has learned from a very reliable source that American karting standout and promising open-wheel racing graduate Jak Crawford will race his final kart race this week in Las Vegas at the 23rd SKUSA SuperNationals.

The five-time Las Vegas podium finisher and two-time winner in the past five years -- dating back to the one-year Maxspeed Entertainment was in Las Vegas -- is said to be headed towards his final SuperNationals due to future restrictions on his racing activities.

Researching online and making a call with someone on Crawford's team to confirm a rumor, Kart360 has learned that the 14-year old was in Milton Keynes at Red Bull Racing headquarters this past week and then in The Netherlands with Van Amersfoort Racing, who helped graduate Max Verstappen into stardom. The same source has confirmed that Jak was on track for two days at the Red Bull Ring for testing with the Van Amersfoort outfit, but the person would not go into any more detail of any possible announcements.

The same source confirmed that the Crawford camp was previously in discussions with one F1 academy for over a year and a half since Jak was 12 visiting their Italian F1 headquarters three times, but discussions stalled in October for no obvious reason. A week later Jak was in the garages with the Red Bull Formula 1 program at the recent Formula One Grand Prix of Mexico, and that things moved very fast. According to Jak's newer social media pages (@JakCrawfordRacing), photos have been posted of the Red Bull Ring in Austria this week.

The question now becomes: Heading into the SKUSA SuperNationals could Crawford be the next one on the Red Bull Junior Team? Mexican Patricio O'Ward was recently ousted from the Red Bull program and all signs point to Crawford entering the Red Bull program. Only time will tell, but we will be watching and waiting for any news on the horizon and will hopefully be able to catch up with Jak next week in Las Vegas. 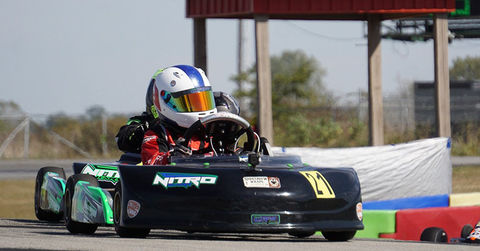 Eight victories in back to back weekends for Team Nitro Kart