After grabbing the pole position on Saturday morning, Emma Delattre lost her footing a bit through the three remaining heats that day, finishing 11/3/2. However, Sunday she came with her A game, winning the final heat in the morning to slot in third for the final starting grid.

Moving past race leader Axel Cabrera with a handful of laps to go, the Connecticut native immediately put a gap between herself and any potential competition.

Cabrera would slip back another spot in the final laps to Orsolon Racing's Felipe Nicoletti. The third place finish for Cabera was as far down as he had been all weekend, as he was the kart to beat up until the Final.

With the second place finish, Nicoletti had earned his best finish of the weekend, coming at the most opportune time.

The Columbian was superior in every sense of the word in New York.rok cup usa 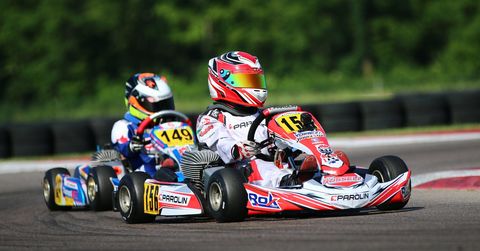 Jace Park ends the weekend on a roll.

2017 engine trade in program will come to an end on Tuesday, October 31.

Conrad Krawiec turned a decent Saturday into an excellent Sunday.