Having been a last minute decision to run, Florida's Tyler Gonzalez had a kart prepared for him by Zanella Racing while Speed Concepts turned the wrenches this weekend. Gonzalez had been tested in each of his heat races, but the SCR driver had no equal in Sunday's 20-lap final at NOLA Motorsports Park for the ROK Festival.

In qualifying, Gonzalez did not post a time we were expecting, landing him in fifth, while his National rival, Matheus Morgatto, had posted quick time and set the tone early. However, Gonzalez made up for lost time in qualifying by turning in two heat race wins and put himself at the top spot on the grid.

The opening laps had Morgatto's Parolin on the tail of the Tony Kart of Gonzalez, but had not moved close enough to make a move. In a very demanding 20-lap final, in 90+ degree heat, Gonzales started to separate himself from Morgatto around the half way mark. By the end, a 5-second gap had been formed between the two, giving Gonzalez a commanding win.

Morgatto finished second, followed by Rafe Abdulali. The Northeasterner had given Gonzalez some real competition in the heats, but had not found that pace again for the Final. The third place result is very impressive for the youngster who now will likely get to defend one of his local courses at OVRP in July at the second ROK Festival.

Ethan Ho gave it everything he had for third, but came up just short in fourth by two-tenths of a second.

A cinematic look at the Florida Winter Tour Round 2 event. 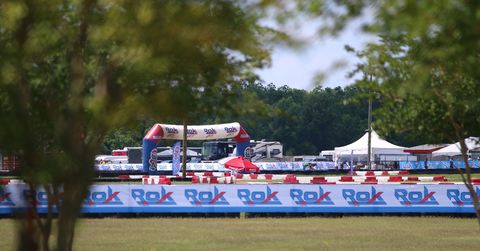 One last heat race followed by the Finals on Sunday in a sweltering New Orleans, Louisiana.