Words and photos below by LRN Photo.

With an entry of 226 drivers technical controls was sure to be a long process starting at 15.00 and finishing at 21.00 on Thursday. Fortunately thanks to the great organization of Kristianstad Karting Klubb, the promotion RGMMC and CIK FIA they finished much ahead of schedule.

Dante Yu represented USA in the highly competitive OK Category, in what was his first CIK event this year.

Yannick De Brabander returned after a 7 year break for directÃƒÆ’Ã¢â‚¬Å¡Ãƒâ€šÃ‚Â­drive karting with the new RS Motorsport (Ralf Schumacher). The 2009 World Cup Winner enjoyed a Heat win in the rain on slick tires by 18 seconds. From the moment the Qualifying Heats started the weather played a huge part in what was two days of constantly changing conditions.

From the 7 entered Americans in OK-ÃƒÆ’Ã¢â‚¬Å¡Ãƒâ€šÃ‚Â­Junior category, Enzo Scionti finished in 14th position in the Final, a result he can be proud of.

Like in Genk two weeks ago, the CIK FIA President Felipe Massa was in attendance to watch the OK and OKÃƒÆ’Ã¢â‚¬Å¡Ãƒâ€šÃ‚Â­-Junior drivers battle it out for their World Championship. Pictured here with RGMMC President James Geidel shows their close working relationship.

Pole man in OKÃƒÆ’Ã¢â‚¬Å¡Ãƒâ€šÃ‚Â­-Junior Taylor Barnard unfortunately could not convert his front row start into the win, but showed he is a great young talent winning 4 out of6 Heats in all conditions possible

Victor Bernier, the new CIK FIA WORLD CHAMPION in OKÃƒÆ’Ã¢â‚¬Å¡Ãƒâ€šÃ‚Â­-Junior category took a deserved win with a strong drive from 5th position on the grid. 2018 was a great year for Bernier and his VDK team.

OK-ÃƒÆ’Ã¢â‚¬Å¡Ãƒâ€šÃ‚Â­Junior podium. In 3rd position Gabriel Bortoleto (CRG) finishes his year with a podium to remember, being the driver who maybe should deserve something more from this 2018. In 2nd position, Gabriele Mini (Parolin) confirmed his speed and closes this first junior season with second position in the most important race of the year. Last but not least your winner, Victor Bernier (VDK Racing / Kosmic).

The start of the most awaited race of the weekend, Travisanutto and Hannes Janker battled throughout the Heats and again in the Final. No doubt about it, these two drivers deserve the results they achieved in 2018.

OK Podium. In 3rd position, Luigi Coluccio gets his best result of the year here in Kristianstad. In 2nd place, CIK-FIA European Champion Hannes Janker couldn't hold on to the lead until the end, but still described his 2nd place as the end of a perfect year and possibly his last race in karting. In 1st position after many disappointments in 2018, he finally got the result he was aiming for, Lorenzo Travisanutto, the new CIK FIA WORLD CHAMPION for 2018.

Kart Republic, in their first year, took a clean sweep of the OK Category winning all major titles from WSK to CIK FIA European and World Championships, something Dino Chiesa and his team can be proud of! 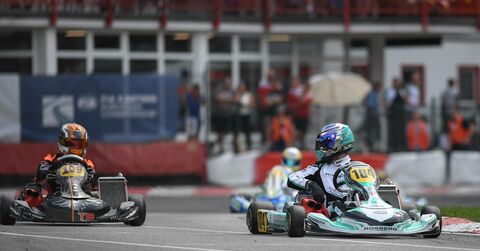 Words and photos by LRN Photo for Kart360. 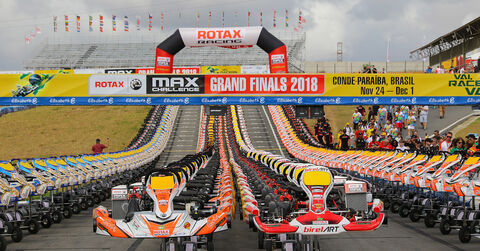 BRP-Rotax, for the very first time, hosted their flagship event in Brazil at Circuito Internacional Paladino.