Update October 29, 2018: Superkarts! USA made their announcement at Saturday night's ProKart Challenge banquet in Anaheim, CA confirming that both CalSpeed and Utah Motorsports Campus will be on the 2019 SKUSA Pro Tour schedule. It also looks as if the dates for the ProKart Challenge may have shifted as well. Official statements from SKUSA should be available soon.

Speculation regarding the 2019 racing season continues after ROK Cup USA, SKUSA, and WKA have now released their event dates. Although the former two organizations have yet to give official details on the locations of their events, we have — with reasonable confidence — an idea of where the 2019 Pro Tour will stop.

Just this morning, Superkarts! USA released their latest ÃƒÆ’Ã‚Â¢ÃƒÂ¢Ã¢â‚¬Å¡Ã‚Â¬Ãƒâ€¦Ã¢â‚¬Å“TomVersationÃƒÆ’Ã‚Â¢ÃƒÂ¢Ã¢â‚¬Å¡Ã‚Â¬Ãƒâ€šÃ‚Â in which SKUSA President Tom Kutscher sits down to answer questions over a 30 minute video interview. The interview was conducted in New Castle, Indiana during the latest SummerNationals event, which concluded a little over two weeks ago now.

Within the video, Kutscher made reference to having the 2019 Pro Tour dates finalized and even made it known that the 2019 SummerNationals will again be in New Castle. However, he says, the first two rounds, WinterNationals and SpringNationals, were still being worked out.

It's not a complete mystery as to what region those first two rounds might be hosted after Kutscher hinted at where he was looking.

Digging a little deeper, you'll notice that the first round of the ProKart Challenge ends on February 23rd. The very next week is the WinterNationals. It would not be in SKUSA's interest to have their core customers having a Pro Tour event across the country days after a California event. This also makes sense to help boost entries to the ProKart event, which typically happens at events the week before the Pro Tour gets to town. CalSpeed would logically make sense here.

As for Utah, that would appear to be a change of pace selection. In my opinion, it's an underutilized facility for national events; it's a facility everyone enjoys; and it's close to the core demographic of the SKUSA base. 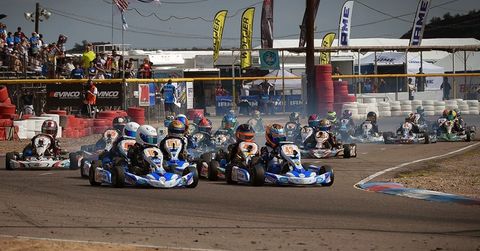