Kart Republic's driver Leonardo Marseglia did an amazing job in Sarno during the first round of the CIK-FIA European Championship. The 15-year old from Ostuni started the weekend 16th in qualifying out of 79 entrants.

During heats he had some ups and downs finishing 3rd, 10th, 6th, 10th and 15th. These results pushed him down to the 21st on the starting grid for the last race of the weekend.

In final, under Nico Rosberg's eyes, Leonardo aggressively made his way forward. Showing an amazing speed, the Kart Republic driver took the checkered flag in 6th, being the first Italian driver.

"It wasn't easy! Our chassis struggles a little bit to adapt to this track, but in the end we found the right set up for both chassis and engine and we had the possibility to recover a lot of positions. It was an amazing race, I'm really satisfied! Thanks to my team and my family for the amazing support. Now we must work hard to have another good result in PFI, we will do our best!"

The next appointment of the CIK-FIA European Championship is at the PF International Circuit in the United Kingdom from May 18th to 20th. 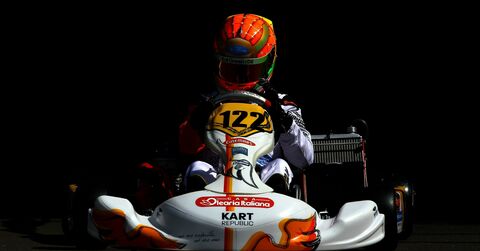