MINI SWIFT - SPONSORED BY: IKF It's finally time for the main event at #SKUSASUPERNATS #SUPERNATS22 - 530 drivers from all over the planet are ready to do battle for the right to be called SuperNationals Champion. MGtires AiM Sports, LLC. IAME Evinco Tires Alpinestars eKartingNews.com BRM Chronographes Americas Kart360 Canadian Karting News

It was yet another Mini Swift event that came down the the final lap as we watched Brent Crews hold back six karts to win gold here in Las Vegas. The pressure came from each direction on the final lap, but the kid from Denver did not stumble.

Crews started from fifth and was quickly into third as he led a trio of drivers trying to catch Kai Sorensen (Supertune USA / Tony Kart) and Nikita Johnson (AKT / Energy) out front. It wasn't until Carson Morgan (RPM / Kart Republic) had moved into the third position that the second group was able to run down the leaders.

The lead group went from two to five as they joined together out front. Lap thirteen proved to the turning point in the 18-lap feature when Crews went from third to first. The Nitro Kart pilot led at the stripe each lap from there on out, despite at times having side-by-side battles but always coming out ahead.

Amid the chaotic closing laps, Johnson had fell to fourth with three to go, but was able to jump up two spots on the penultimate lap and hold that position to the end. My pick to win, Alex Powell (Speed Concepts / Energy), did not appear to have the pace to win, but he kept it close with smart driving and help from the battles ahead of him. The Jamaican kept his nose clean down the stretch and moved into the third spot at the checkered. 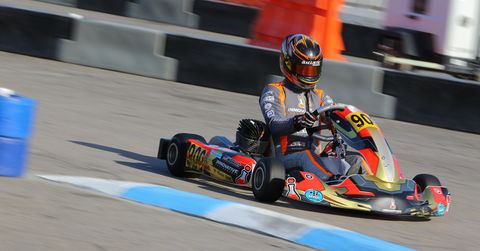 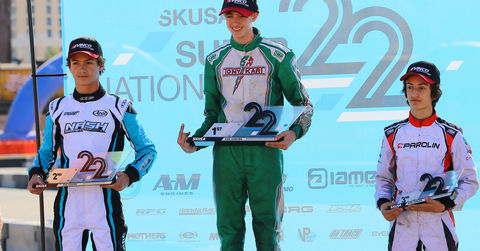